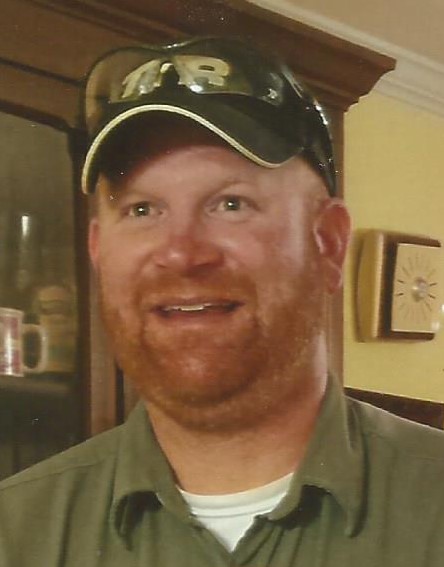 Updated Service Information: A Visitation/Reception with light refreshments is planned for Saturday, April 30, 2022 from 1:00 p.m. to 3:00 p.m. at the Independence Senior and Community Center, 2001 Jackwoods Parkway, Independence. A Celebration of Life Service will immediately follow at 3:00 p.m.

Christian “AshLee” Morris came into this world on February 5, 1974 as a little ray of sunshine for his parents, Bobby Morris and Betty Ecklar. The first baby in his family, Ashlee was loved and doted on by his grandmothers as well as his Aunt Rose, Aunt Patricia (Trish), Aunt Judy, Uncle Paul, and Uncle Bobby Welch. He loved his mom and dad, and that love would never stop. As he toddled into everyone’s hearts, he carried with him his first favorite thing, his Pooh Bear.

Though he was born in Oneida, Tennessee he would move to Madisonville, Kentucky at an early age and begin what would become a great love of UK basketball, much to the chagrin of his Volunteers loving Tenness family! At the age of seven Ashlee welcomed his little sister, Elishia Chamberlain, into the world and became the best big brother a sister could ask for. Once she was here you rarely saw him without her in his arms or holding his hand. His love and affection for his family always remained and extended to his cousins Daniel, Travis, Josh, and Megan. He loved them all as a big brother.

In 1986 Ashlee’s family came to Morning View, Kentucky. They welcomed a new member of their family, Ernest “Ernie” Ecklar who proudly accepted the role of Ashlee’s stepdad, and later his Dad. With Ernie came the entire Ecklar Family that would open their hearts and arms to their new grandson, nephew, and cousin. Ashlee was happy to join this family and loved his Ecklars to the end.

When they arrived in Northern Kentucky he was fortunate enough to find friends that would become his brothers, and they would remain so through all the obstacles they would face: Jamie, Daryl, Marty, Brian, Rick, Steve, Denver, Jeff, and more. Of the two siblings, Ashlee was the one who was gifted with the good looks, and good legs. One day he just started running and he didn’t stop. He was a runner for the Simon Kenton High School Track Team as well as Cross Country Team where he would go on to win titles and make everyone around him feel genuinely slow. Being the lanky noodle of a teenager he was, he joined the Wrestling Team where he discovered he was quite good at both wrestling and breaking fingers. The latter would result in his ending his time on the wrestling team.

Ashlee is preceded in death by his Dad, Bobby Morris. His father’s traumatic death would scar Ashlee’s heart in a way that never quite healed. He carried on into his adult life with this pain.

Ashlee was employed with Ashland/Marathon Oil for 26 years. He was proud of his growth within the company and worked to excel in his trainings and professional development so he could serve his position well. He developed friendships with his coworkers that he would later consider close as family.

Ashlee dearly loved his Mom, Dad, Stepdad, Sister, family, and friends. There was a time that Ashlee would have told you he loved no one above his mother, but as he grew and changed so did his love. He would go on to love his now ex-wife, but there was another still. There was no love greater than his love for his daughter. Mackenzie Olivia Morris was the person Ashlee longed to be with and loved more than his heart was capable of handling. To see the two of them together was to see joy. She beamed when she looked at him, and he shined when he was with her. When it came to overcoming his greatest struggles, it was her name he said. It was his daughter that inspired him to keep fighting for life.

It is often said the bigger the heart the bigger the struggle, the brighter the light the darker the night. Our capacity to love is great, but some hearts are so big the person’s love breaks them. To be loved by Ashlee was to be loved wholly. It was his love that broke him, and it was his love that in the end would heal him. No person is perfect, and Ashlee had his faults like we all do. He was brave enough to right his wrongs and seek his redemption. He fought through more pain and sickness than most humans could dream of enduring, and he did so without complaint.

He wanted to live. His love was so big, but his body was tired. It was his body that gave out, but never his spirit. His love is in each family member and each person he called a friend. Ashlee’s gift was laughter and happiness, and he leaves that gift with all of us. He is forever in our hearts waiting to help us laugh when we are sad and helping us to feel happiness when we are lonely. In the end Ashlee came home, he first came home to his Mom and Dad with nothing but his faith, and then his faith carried him home to God.

Christian Ashlee Morris is preceded in death by his father Bobby Morris. He is survived by his Daughter Mackenzie Morris, Mother Betty Ecklar, Stepfather Ernest “Ernie” Ecklar, sister Elishia Chamberlain, many dearly loved Aunts and Uncles and cousins, and by more friends than can be named. His story is one of grace and forgiveness. He leaves a legacy of love and laughter. His life carries on in the person he treasured most in this world, his daughter Mackenzie who will always be his “Mac Attack”.

Once celebrations can be planned, we will gather together to celebrate Ashlee's life, to share our stories and laughter and our grief as well because f or anyone that was ever loved by Ashlee, Winnie the Pooh said it best, “How lucky I am to have something that makes saying goodbye so hard.”

Donations in his honor can be made to the American Kidney Foundation or the National Alliance for Mental Health (NAMI).

To order memorial trees or send flowers to the family in memory of Christian AshLee Morris, please visit our flower store.