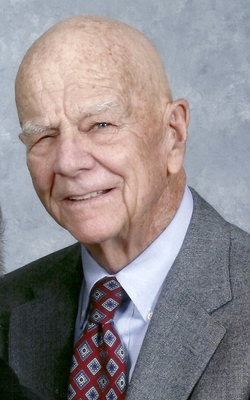 
Robert Burton Brewer, 97, of Crestview Hills died on August 2, 2016 at the home of his daughter Betty, in Dalton, Georgia.

Bob grew up in Lebanon, Kentucky. The son of Elizabeth (Bottom) and John Bowman Brewer, he attended VMI before enlisting in the U.S. Army. During his World War II Army service, Bob served as a communications specialist aboard a Navy Ship spending most of his time in Italy.

Following the war, Bob joined his father in the men’s clothing business working for the H.A. Seinsheimer Co. until his retirement. He was a founding member of Lakeside Presbyterian Church where he served as an Elder for many years.

He was preceded in death by his wife of 53 years, Ruth Stockler Brewer of Louisville, Kentucky. Also preceding him in death was his sister, Cecil Fish; and his brothers, Jack Brewer, Mac Brewer, Bill Brewer, Sam Brewer and Tom Brewer.

A Celebration of Life will be held at the convenience of the family. Middendorf-Bullock Funeral Home, Erlanger is serving the family.


To order memorial trees or send flowers to the family in memory of Robert Brewer, please visit our flower store.